A light and fluctuating state... 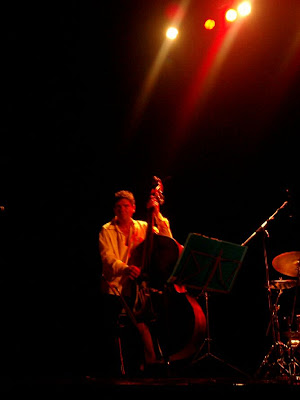 "What a strange, wondrous thing, music. At last the chattering mind is silenced. No past to regret, no future to worry about, no more frantic knitting of words and thoughts. Only a beautiful, soaring nonsense.


Sound - made pleasing and intelligible through melody, rhythm, harmony and counterpoint - becomes our thinking. The grunting of language and the drudgery of semiotics is left behind. Music is a bird's answer to the noise and heaviness of words. It puts the mind in a state of exhilarating speechlessness.


During the Concerto in B flat, music was my thinking. I don't recall any words, only a light and fluctuating state of being-in-music."


Page 116, 'The Time I heard the Private Donald J.Rankin String Concerto with One Discordant Violin, by the American Composer John Morton'-
from the book 'The Facts behind the Helsinki Roccamatios' by Yann Martel
Posted by Asha at 10:39 PM No comments:

So we had to kill Jimmy, end his suffering, or so we thought, reduce his already brief life as a fish. Euthanize, that is the word.

A fish. A solitary soul floating around in a round bowl, glad to see me every morning at office, because I was the provider of food, unfailing, dependable.

Since I am way beyond believing in unseen powers taking personal interest in the likes of me and Jimmy, it is not for me to see signs, things are just as they are, ordinary, of no consequence in the bigger scheme of things.

The universe, random as always, in its cruelty.
Posted by Asha at 10:55 PM No comments:

Email ThisBlogThis!Share to TwitterShare to FacebookShare to Pinterest
Labels: Personal

"...The road twists and banks and curlecues and descends and we and the cycle smoothly roll with it, following it in a separate grace of our own, almost touching the waxen leaves of shrubs and overhanging boughs of trees. The firs and rocks of the higher country are behind us now and around us are soft hills and vines and purple and red flowers, fragrance mixed with woodsmoke up from the distant fog along the valley floor and from beyond that, unseen - a vague scent of ocean... ...

How can I love all this so much and be insane? ...I don't believe it!"
'Zen and the Art of Motorcycle Maintenance'
Robert M Pirsig
Posted by Asha at 10:00 PM No comments:

in their chairs, the most serious of them all
said it was his car,
being in it alone, his tape deck playing

things he'd chosen, and others knew the truth
had been spoken
and began speaking about their rooms,

their hiding places, but the car kept coming up,
the car in motion,
music filling it, and sometimes one other person

to speak, or to answer, the key
in having a key
and putting it in, and going.

"The Sacred" by Stephen Dunn, from Between Angels.
Posted by Asha at 8:52 PM No comments:

"It is true that many creative people fail to make mature personal relationships, and some are extremely isolated. It is also true that, in some instances, trauma, in the shape of early separation or bereavement, has steered the potentially creative person toward developing aspects of his personality which can find fulfillment in comparative isolation. But this does not mean that solitary, creative pursuits are themselves pathological...

Avoidance behaviour is a response designed to protect the infant from behavioural disorganization. If we transfer this concept to adult life, we can see that an avoidant infant might very well develop into a person whose principal need was to find some kind of meaning and order in life which was not entirely, or even chiefly, dependent upon interpersonal relationships."

Anthony Storr, 'Solitude: A Return to the Self'
Quoted in 'Into the Wild', the story of Christopher McCandless, who "went away". By Jon Krakauer
Posted by Asha at 8:12 AM No comments:

It's better to be a cat than to be a human.
Not because of their much-noted grace and beauty—
their beauty wins them no added pleasure, grace is
only a cat's way

of getting without fuss from one place to another—
but because they see things as they are. Cats never mistake a
saucer of milk for a declaration of passion
or the crook of your knees for

a permanent address. Observing two cats on a sunporch,
you might think of them as a pair of Florentine bravoes
awaiting through slitted eyes the least lapse of attention—
then slash! the stiletto

or alternately as a long-married couple, who hardly
notice each other but find it somehow a comfort
sharing the couch, the evening news, the cocoa.
Both these ideas

are wrong. Two cats together are like two strangers
cast up by different storms on the same desert island
who manage to guard, despite the utter absence
of privacy, chocolate,

useful domestic articles, reading material,
their separate solitudes. They would not dream of
telling each other their dreams, or the plots of old movies,
or inventing a bookful

of coconut recipes. Where we would long ago have
frantically shredded our underwear into signal
flags and be dancing obscenely about on the shore in
a desperate frenzy,

they merely shift on their haunches, calm as two stoics
weighing the probable odds of the soul's immortality,
as if to say, if a ship should happen along we'll
be rescued. If not, not.

"After years of patient study I have decided that there is nothing wrong with the game (cricket) that the introduction of golf carts wouldn't fix in a hurry. It is not true that the English invented cricket as a way of making all other human endeavours look interesting and lively; that was merely an unintended side effect. I don't wish to denigrate a sport that is enjoyed by millions, some of them awake and facing the right way, but it is an odd game.

...Imagine a form of baseball in which the pitcher, after each delivery, collects the ball from the catcher and walks slowly with it out to centre field; and that there, after a minute's pause to collect himself, he turns and runs full tilt towards the pitcher's mound before hurling the ball at the ankles of a man who stands before him wearing a riding hat, heavy gloves of the sort used to handle radioactive isotopes, and a mattress strapped to each leg. Imagine moreover that if this batsman fails to hit the ball in a way that heartens him sufficiently to try to waddle sixty feet with mattresses strapped to his legs, he is under no formal compulsion to run; he may stand there all day, and, as a rule, does.

If by some miracle he is coaxed into making a misstroke that leads to him being put out, all the fielders throw up their arms in triumph and have a hug. Then tea is called and everyone retires happily to a distant pavilion to fortify for the next siege. Now imagine all this going on for so long that by the time the match concludes autumn has crept in and all your library books are overdue. There you have cricket

....Now the mystery of cricket is not that Australians play it well, but that they play it at all. It has always seemed to me a game much too restrained for the rough-and-tumble Australian temperament. Australians must prefer games in which brawny men in scanty clothing bloody each other's noses. I am quite certain that if the rest of the world vanished overnight and the development of cricket was left in Australian hands, within a generation the players would be wearing shorts and using the bats to hit each other.

And the thing is, it would be a much better game for it."

My French artist friend Fred's beautiful sketches, drawn during his many wanderings, across many continents. He used to show me these sketches he drew of people, in his notebook, while waiting at bus stands, travelling in trains etc.
http://lescarnetsdefred.blogspot.com/
Check out his work with clay masks of people's faces - http://baptemesdeterre.blogspot.com/
And his installations with these masks, in the most unexpected locations: http://baptemesdeterre.blogspot.com/
Bonne Chance, Fred!
Posted by Asha at 7:30 AM No comments:

A terror way beyond falling

"The so-called ‘psychotically depressed’ person who tries to kill herself doesn’t do so out of ‘hopelessness’ or any abstract conviction that life’s assets and debits do not square. And surely not because death seems suddenly appealing.

The person in whom its invisible agony reaches a certain unendurable level will kill herself the same way a trapped person will eventually jump from the window of a burning high-rise. Make no mistake about people who leap from burning windows. Their terror of falling from a great height is still just as great as it would be for you or me standing speculatively at the same window just checking out the view; i.e. the fear of falling remains a constant.

The variable here is the other terror, the fire’s flames: when the flames get close enough, falling to death becomes the slightly less terrible of two terrors.

It’s not desiring the fall; it’s terror of the flames. And yet nobody down on the sidewalk, looking up and yelling ‘Don’t!’ and ‘Hang on!’, can understand the jump. Not really. You’d have to have personally been trapped and felt flames to really understand a terror way beyond falling."

David Foster Wallace
Posted by Asha at 7:25 AM 1 comment: